Although I had published this on a tab I realized it wasn't easily accessible for readers scrolling through my main page so I am posting a copy here also.

My name is Ashley and here is my survivor story:

When I was 19 years old and I had just finished my freshman year of college I went to an off campus party near my hometown. I had just gotten off of a shift at work and arrived at the party several hours after it had begun. I was trying to find two of my friends in order to drive them home since they had been drinking but I didn't know the layout of the house or anyone else there. A young man about my age offered to help me find them. He seemed nice and I welcomed the help. I remember he asked for a piece of gum but I informed him I was chewing my last one. He told me he would take that one. I thought it was odd, it probably should have been a red flag but I was naive and spit out my gum and placed it in his palm. I remember thinking how gross it was that he was so desperate for a piece of candy that he would chew a used piece. He led me through the kitchen as we searched for my friends. I was looking for the second patio when he suggested we check a room to make sure they weren't in there.I followed him into the dimly lit room and began to feel uneasy. Before I knew it, I tried to exit the room as it was obvious, no one else was in there. The door was locked. I fumbled with the handle and then the nightmare begun. He began to pull me into him groping my neck. I was disgusted and confused. I yelled at him "What the fuck are you doing" “I’m seeing someone I am not interested! Leave me alone! Let me out" A wave of panic started to take over my body as I realized how much bigger and stronger he was than me. He had no intentions of letting me out.  I struggled to get free recalling my years of Shotokan karate training. Breakaways, kicks, punches, deflection it didn't work it seemed like he was catching my limbs as I moved them. He seemed to get enjoyment out of the struggle laughing at my failed attempts to hurt him but then he became angry. He grabbed my hair and threw me onto the floor and kicked me. I scrambled to get back up each blow I dealt was met with an even stronger opposing force. I questioned if I would make it out alive. No one was coming to save me. How could no one here me screaming?

I don't want to get too graphic so I will sum it up like this:

At some point I chose to get out alive and stopped fighting in order to do so. I disconnected with my body and felt like I was floating over myself watching it happen to someone else.

That night I lost my virginity to a monster. A stranger that felt he could take me like a conquest or a shiny object for his collection.

When it was over I pulled up my pants and ran out of the room where I was greeted by a guy who mocked me "What were you doing in there slutting around?" he slurred. I was horrified. I ran until I found my car, I got in and drove off. I wanted to leave this all behind me I just wanted to reach safety.

I didn't call the police. I wish I had. I drove frantically for almost an hour lost. My sense of direction was completely gone.

The months and even years after the event was not something I was prepared for. The first year after, I lied to many of my friends and family and told them I had gotten away. It was easier and I wanted it to be true. I spun out of control at the beginning, doing anything I could to shut my brain off. I lost many friends and set up my relationships for failure before they begun. A year and a half later I met my husband. I was heading for a downward spiral and he brought me back to life. Meeting him was unexpected and wonderful. I was honest from day one about the hardships I faced and the fractured state of my mind. He stayed by my side during the highs and lows. We had a world wind romance. It’s now been over 7 years together and I feel as strongly about him, as I did at the beginning. Although we live an enchanted life my PTSD still creeps into my daily life. I am extremely proactive in my recovery/ healing and have a strong support system. I have found that connecting with others has been extremely beneficial in moving forward and that is what I am hoping to do here with my PTSD blog. 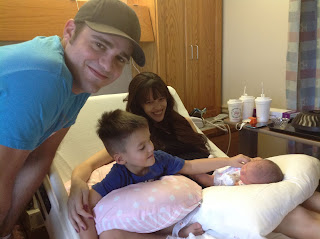 Here is a picture of me 8 years after the trauma ( my husband on the left and our two beautiful children) in a completely different place in my life. My happiness comes from finding my perfect balenance and remembering to cherish the good moments big and small.
Labels: PTSD rape sexual assault survivor stories survivor story trauma