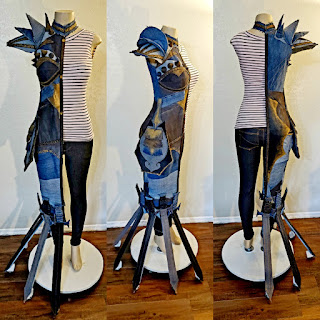 Pictured is my piece titled: FALSE ARMOR: A VISUAL REPRESENTATION OF DENIM DAY


I have been accepted into my first art show! When I saw that St Pete's Venus in orbit art gallery was hosting a denim art show I just knew I had to be a part of it. I have been therapeutically sewing for the last few years and have found great joy and peace in my new hobby, so when an opportunity to submit an idea for this upcoming art show presented itself, I thought long and hard about what I would like to make. The call for artists described a walk through the history of denim and its many uses in art, I have to be honest even as a"sewist/designer" I am not the most educated on the history of this textile ...with one exception... DENIM DAY.

What is denim day?

1992, Rome, Italy —
An 18-year-old girl was raped by the 45-year year old driving instructor who was taking her to her very first driving lesson. He took her to an isolated road, pulled her out of the car, removed her jeans and forcefully raped her. She reports the rape and the perpetrator is arrested and prosecuted. He is then convicted of rape and sentenced to jail.
1999, Rome, Italy —

The driving instructor appeals the sentence, claiming that they had consensual sex. The case makes it all the way to the Italian High Court where the conviction is overturned and he is released.
A statement from the Court argued that because the victim wore very tight jeans, she had to help him remove them, and by removing the jeans it was no longer rape but consensual sex. This became known throughout Italy as the “jeans alibi.” Enraged by the verdict, the women in the Italian Parliament protested by wearing jeans on the steps of the Supreme Court. This protest was picked up by international media and has become an annual global protest and education platform.

Inspired by denim day, I wondered how I would translate the message that jeans don't protect you from assault into an art piece... ding ding ding... tight denim is not protection IT IS NOT ARMOR!
With this idea firmly in my head I started to design. I had never sewn anything from denim before other than upcycling some old jeans into a skirt or shorts so I was happy when I found a pattern for the wearable skinny jeans I wanted to make ( patterns for pirates s.o.s. pants). I then designed the shirt that I would use to pin all my armor pieces to while designing. I used old pairs of jeans to source the majority of my fabric, painting some pieces with metallic paints while displaying other inside out. Then I decided to make it wearable which truly put my creativity to the test. I started adding buttons and a weaving elastic band to hold the piece close to the body, then next thing you know I'm having my husband cut wood pieces so I could mount the sword bottom to ball bearing wheels! I was fully enthralled in this project every step of the way and am so please with how it came out!

Why was this project so important to me to create?

It mixes alot of my interests: geometry, sewing, designing and advocacy. It is also conveying a very personal message for me. When I was attacked I was wearing a pair of jeans. I want to help spread awareness and education to people who may have not heard of denim day before.

This may have been one of the most emotional sewing projects I have ever started but I am extremely proud of myself for bringing my idea to fruition.

If you would like to showcase this piece in the future please email me at aaldouspangborn@gmail.com 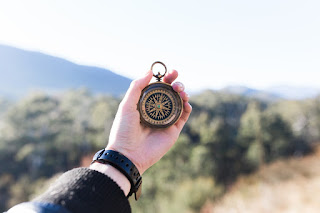